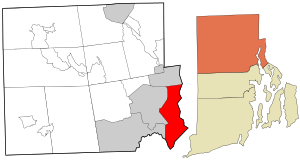 Once part of Rehoboth and then Seekonk, Massachusetts, East Providence became an independent Rhode Island town in 1862.  Today the city consists of five identifiable neighborhoods, each with a distinct character.

This section of East Providence is located along the Omega Pond and the Seekonk River.  From the 17th century, it was home to industrial activity.  After 1890 a small "company town" associated with the Washburn Wire Company became known as Phillipsdale in honor of Eugene Phillips, the company president.

Located north of the Ten Mile River and established as a neighborhood from 1643 onward, this is the site of the original East Providence (Rehoboth) settlement.  It has also been known as Seekonk Centre and East Providence Centre.  The area was predominantly agricultural until the 1930's with one exception: the Rumford Chemical Works began here in 1857.  Today, this East Providence neighborhood is considered a suburb of Providence.

This is the most centrally located, most populated area of the city and the neighborhood that is usually understood when one says, "East Providence."  In the 1840's, Watchemoket began to develop as a suburb of Providence.  Growth continued through the 1920's.  Today Interstate 195 bisects the area.  This part of the city also has the greatest number of commercial, institutional and municipal facilities.

Farm land along the southern end of Pawtucket Avenue gave rise to rapid residential growth after World War II.  Most of the area is now filled with contractor-built subdivisions.  This neighborhood is named for the Kent Family who farmed the area from the 18th century.

The southernmost section of the city was known as a summer colony beginning after the Civil War until the 1920's.  Campsites gave way to resort hotels and amusement parks.  Converted summer cottages eventually became year-round homes.  Today, the Crescent Park Carousel is all the remains of the resort area.  Many new homes are being built in Riverside today.  Recreation continues along the Bike Path, built on the former railroad bed.