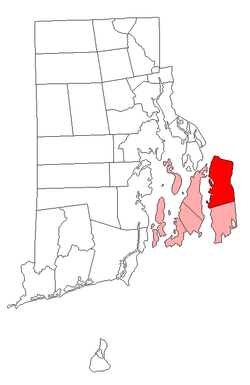 Tiverton is a town in Newport County, Rhode Island, United States. The population was 16,359 at the 2020 census. Tiverton is located on the eastern shore of Narragansett Bay, across the Sakonnet River from Aquidneck Island (also known as the Island of Rhode Island). Together with the adjacent town of Little Compton, the area is disconnected from the rest of the state of Rhode Island. The northern portion of the town is located on Mount Hope Bay.