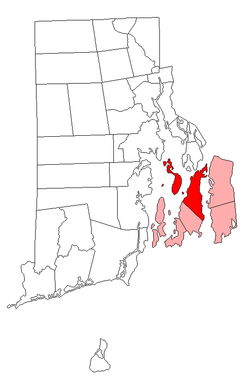 Portsmouth is a town in Newport County, Rhode Island. The population was 17,871 at the 2020 U.S. Census. Portsmouth is the second-oldest municipality in Rhode Island, after Providence; it was one of the four colonies which merged to form the Colony of Rhode Island and Providence Plantations, the others being Providence, Newport, and Warwick.